U-Pick Monday Marathon was a special programming block, hosted by Henry and June, with Mr. Foot (all of KaBlam! fame) as their sidekick. It was a special broadcast version of U-Pick Friday and it aired on January 17, 2000 from 2-8 p.m on Nickelodeon.

The announcement made by Nickelodeon for the show was following: "Henry, June, Mr. Foot and YOU picked six hours of your favorite Nickelodeon shows LIVE by phone or on the Nick website in the U-Pick Monday Marathon!"

Just like normally, Viewers could compete in the show by calling a 1-800 phone number on the screen or vote on Nick.com to choose the next cartoon out of three options made available picked from ten, with the exception of the first Nicktoon. That entry was voted on the website itself, like usual.

Outside of the results (available here and some footage (listed below), most of the other media around it has been lost.

Here is a video with all the current footage available for U-Pick Monday Marathon. 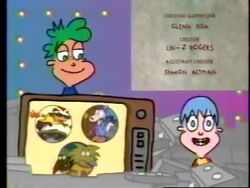 Since the U-Pick segments of the marathon are interchangeable with the stuff used normally, both of them are presented.

Henry and June greeting the viewers

Henry and June showing the Nicktoons to choose from

One method to choose was either to call...

...or going to Nick.com for the poll.

Henry and June in the U-Pick Studio

Henry in the U-Pick Studio Close-up

June in the U-Pick Studio Close-up

The winner (in this example) is Rugrats!

The poll after it was filled out

Mr.Foot slamming the tape in

Mr.Foot early in the show with good mood

Mr.Foot later in the show, hastingly throwing the tape in

The U-Pick Friday logo used during an episode of Rugrats

One of the transitions used for commercial break

Another one used for transitioning

Henry and June moderating the end of U-Pick Friday

Henry and June closing the line