The Little Freaks is a traditional animation segment co-created by Aaron White and Joe Russo, seen on the Nickelodeon animated sketch comedy series KaBlam!. It first appeared in the Season 4 episode "Going the Extra Mile!" and then as an interstitial on Nicktoons.

Three mutated and teenaged superheroes try to stop a fashion villain from making everyone wearing his horribly-designed jumpsuits, with the even more horrible ability to control the wearer's mind!

In the studio of the evil-fashioned villain, No-Face, he says the best fashion is ONE fashion! He is releasing special moths into the atmosphere that are now eating everyone's clothes. As the famished moths munch, overexposed citizens are forced to wear No-Face's personal line of jumpsuits. He is overjoyed that his plan is working, as Center City is thrown into a state of total uniformity.

Meanwhile, on the other side of town, a small band of unlikely heroes known as the Little Freaks are studying the perplexing predicament. Tryla says the group has to do something, as the sheer fabric of self-expression is dangling by a thread. Mike and Michael Dubbs think Tryla is right, because if everyone is forced to wear No-Face's jumpsuits, everyone will look the same! Braingel clarifies their clothes will, at least. Tryla believes that jumpsuits are an assault on a person's sense of self-identity. Desperate for a solution, the Little Freaks as a whole are relying on Braingel for a plan. Suddenly, but not surprisingly, Braingel's beautiful brain goes dead, and he says he wants to be a dentist. But then, his brain comes alive again!

With the kind of speed you only see in cartoons, the Little Freaks prepare to launch themselves directly into the lair of the evil haberdasher. No-Face says first he will control what they wear, then what they think, and then the world will be his! Suddenly, the Little Freaks land in his lair, but they are outnumbered, and Tryla wonders where Dubbs is. However, Mike and Michael missed the mark and landed instead in the dark, lonely but rent-controlled apartment of an aging disco queen. However, she is friendly and gives them a disco ball. Arriving at No-Face's lair, Dubbs displays the "luminescent" gift as the intoxicating beat of disco music begins to fill the air. No-Face's lonely and overworked moths are quickly drawn to the light, the excitement and the chance to meet someone nice. No-Face says this isn't a school dance, as he's trying to take over the world! Braingel, Dubbs and Tryla say the moths like the nightlife and like to boogie. No-Face is distraught, and now resorts to selling his jumpsuits. Once again, Center City has been saved by the Little Freaks, as an individual expression through fashion has returned to the quiet urban hamlet! 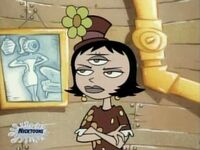 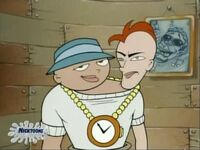