Anemia and Iodine (stylized as Anemia & Iodine) is a traditional animation segment created by alternative comics artist, painter, writer and performer Krystine Kryttre. It was seen in the Season 1 episode "What the Astronauts Drink!" as part of the Surprising Shorts feature on the Nickelodeon animated sketch comedy series KaBlam!.

Anemia, her best friend Iodine and Anemia's hyperactive brother, Dropsy, visit spooky places, while searching inside of them for paranormal activity. 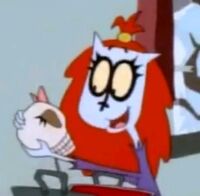 A redheaded anthropomorphic cat, she is the oldest of the three, and is Iodine's best friend. She specializes in occult arts, including exorcism, clairvoyance and communicating with spirits. 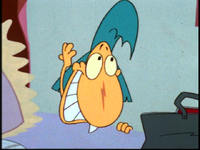 An anthromorphic wallaby, she is the middle-aged of the three and is Anemia's best friend. She helps Anemia out with her goal. 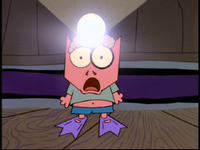 He is the youngest of the three, and is Anemia's brother. He is energetic and ready to take a risk if he wants to help them with their goal, even though they don't want him to get involved.